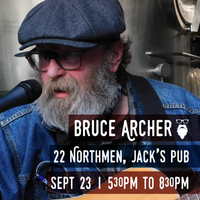 He plays a smoky, primitive Americana infused with blues, bluegrass, country, folk, and rock influences. His impressive finger-picking and slide guitar display a level of mastery that comes from 40-plus years of playing and sifting through musical styles, keeping the bits that resonate with him while merging his Iowa roots and his years in the Minneapolis alt-rock scene. He coaxes from his guitar an instrumental voice that is authentically his own.

Masterful finger-picking and slide guitar punctuate the highly autobiographic lyrics of his album THE HALLOWED LAND. This eclectic, sometimes rollicking, sometimes reflective, genre-bending album is a paean to traditional storytelling.

Archer's career has taken him from open mic nights in college, through forming and writing for bands that regularly played high profile alt-music clubs in Uptown, Downtown and West Bank Minneapolis, to returning to solo gigs in the north woods of Minnesota. He's enjoyed playing with some top-notch musicians, including opening for legendary bass guitarist Ronnie Lane (Small Faces), the Uppity Blues Women, the Jayhawks, the Gear Daddies’ frontman Martin Zellar, the Phones, and Run Westy Run—to name a few.

Through it all, he has relied on his Iowa roots and sense of who he is bringing a raw authenticity to his performances.